Sen Warren: ”If you say, 'Yeah, there was sexism in this race,' everyone says, 'whiner.' And if you say, 'No, there was no sexism,' about a bazillion women think, 'What planet do you live on?' I promise you this: I'll have a lot more to say on that subject later on." pic.twitter.com/VkRA8js6ze

A long time since I last posted here. And no, i don't have the Coronavirus

The old world is dead. It's time to create a new one.

Healthcare and Some Videos

I haven't written in a while, but these videos are so good, I want to hang on to them and watch over and over again.


"You can actually pinpoint the second when his heart rips in half." pic.twitter.com/nDOlZq1mZk
— Parker Molloy (@ParkerMolloy) July 28, 2017

And fine, here it is with the Curb Your Enthusiasm theme music: pic.twitter.com/V1y1hWxO7T
— Parker Molloy (@ParkerMolloy) July 28, 2017

Link in the comments for any others I should add.

Hillary Clinton does not have Parkinson's Disease

I am going out on a limb and stating this.  Hell, there's probably more evidence that Bill has Parkinson-like symptoms, but not being a neurologist and having spent no time one-on-one with President Clinton, no one but his doctor would know, including myself.

And that is the reason that I can state Hillary Clinton does not have Parkinson's Disease.  Parkinson's is a very individualized disease with many symptoms that may or may not be related. Most folks with the disease are actually misdiagnosed for anywhere from months to years after first symptoms appear. I took two years (symptoms at 32, dxd at 34) and I've heard some patients who took 5-10 years (usually, they were young onset, like myself). So, trying to use symptoms to diagnose someone is ridiculous in and of itself.  Also, there is a particular series of tests/movements a neurologist goes through to diagnose someone and differences are usually subtle and often require hands-on the patient to perform.  So to say that you know someone has PD because of one or two Parkinson-like symptoms is absolutely ridiculous.

On the other hand, even if she had PD, who cares.  She is very active, like anyone running for President and that is considered the best way to fight the disease.  I know folks who have had the disease and run multiple marathons every year. For example John Ball, a Vietnam Vet who wrote, Living Well, Running Hard has had PD since the 80s and still runs the LA Marathon most years.  My wife and I befriended a woman who has had PD since the 90s and is on pace to run about 50 marathons this year and will hopefully make the Runner's World cover for December.  You would not call either of these folks feeble or weak, and I wouldn't call Hillary Clinton that either.

I've officially been off most of my PD meds for over a week now.  Last week, the nurse who does the programming of my system, increased the voltages in my left side (right brain) and I was able to walk normally, with no meds.  I'm still noticing some occasional tremor, like while I'm typing, but I have had no meds for over a week.  I will continue to play with my voltages and meds to see if I can improve my symptoms some more, but is already having a dramatic effect.

Some improvements besides reduction in meds:


To put it bluntly, my surgery is working even better than I hoped.  Here's to it continuing.
Posted by yopd1 at 2:09 PM 1 comment:

It's been a while, but I had brain surgery and it worked!

I had brain surgery again, just over two weeks ago.  I was released from the hospital the day after surgery and here's the shot my wife posted to Facebook, with the caption, "Who had brain surgery yesterday and was already released today? This guy!" 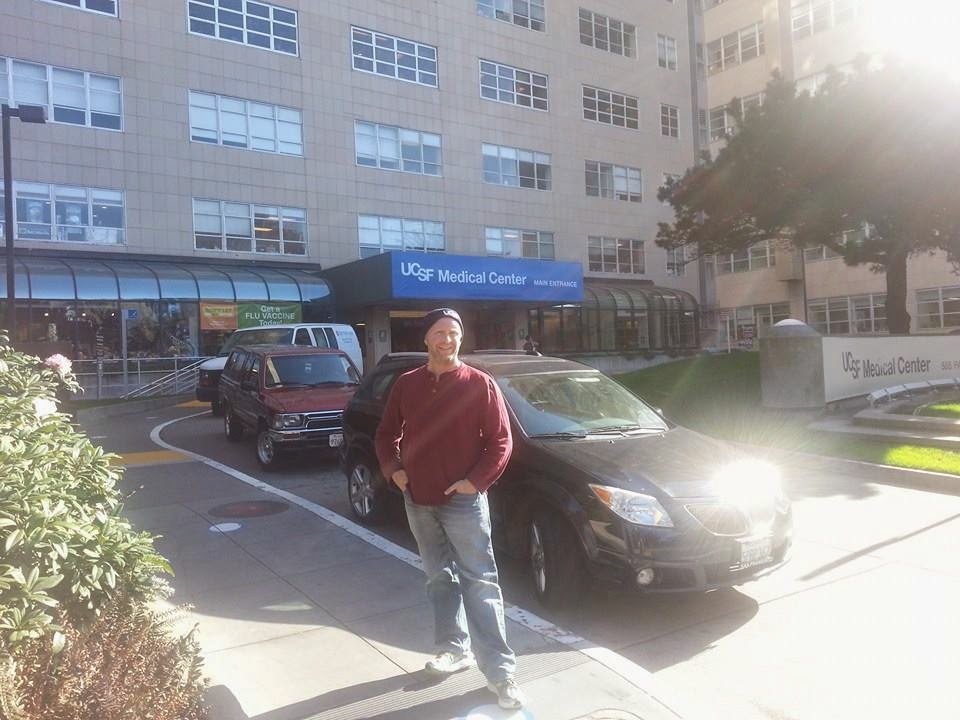 They turned my leads on the following week, and to say there is a difference between now and then would be understating the case by orders of magnitude.  I am so happy with how the new leads are working after just the first programming session.  My walking has improved, my tremor has reduced, and my med intake has dropped by over half.  Right after programming, I took an extended walk with friends to a bar in downtown San Francisco.  I was doing great, until my meds kicked in and my dyskinesia went crazy, that was when I realized, I would need to dramatically reduce my meds.  I am still figuring the med levels and times that work well for me; however, I am doing well and feeling better than ever.

Thanks for all the well wishes over the past two years since I began looking at having my first surgery.  I don't wish my experiences of a stroke, heart attack and finding the leads had moved to finding a new surgeon and having the new leads installed on anyone, but hope others can find solace in my experiences and know that there is good news, eventually.